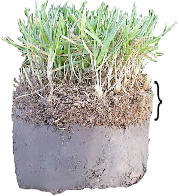 Thatch serves important roles in the overall health of your lawn, which is why you don’t want to rip it out (along with tender, new growth), by power raking.  Thatch shades the crowns and root system; aids in moisture retention; reduces soil erosion; protects against temperature extremes; and promotes microbial activity.

Excessive thatch predisposes the turf to drought stress or winter kill and increases the possibility for insect, disease and weed problems. Also, fertilizers and pesticides applied to a thatchy lawn work less effectively.

Thatch should be less than ½ inch thick

Don’t do it!  Aerate instead

“Deep power raking of a thatchy lawn can be damaging, and often removes a substantial portion of the living turf. . . .  [Aeration] is more beneficial than power raking.  It helps improve the root zone by relieving soil compaction while controlling thatch accumulation. Soil compaction, in fact, is one factor that contributes to thatch buildup.”

(1) by loosening the soil, thereby improving movement of water, air, and nutrients into the root zone, roots can grow deeper rather than back up into themselves;

(2) by pulling microbes to the surface, aeration facilitates the natural decomposition of thatch.